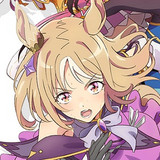 Fear of heights ! Some quick news for all you Girls on Horseback fans: A new anime series has been announced for Umamusume: nice derby, a mixed media project from Cygames, Inc. that reimagines real-life racehorses as cute anime girls running and singing. Aside from the teaser visual (above) and trailer (below), few additional details about the new series (such as cast, crew, format, and release date) have yet been revealed.

The plot of the new series is described as different from the TV series, focusing on riders Narita Top Road, TM Opera O and Admire Vega as they aim to conquer the Classics, a series of six races.

Crunchyroll is currently streaming the first two seasons of the Umamusume: nice derby TV anime, and describes the story of the series as follows:

It is the story of a world where “girls on horseback”; with glorious names and incredible racing abilities live alongside mankind. Horse girl Special Week moved from the countryside to the city to attend Tracen Academy. There, she and her classmates compete to win the Twinkle Series and win the title of “The No. 1 Rider in the County.”

Paul Chapman is the host of The greatest movie of all time! Podcast and GEM! Lively fun time.