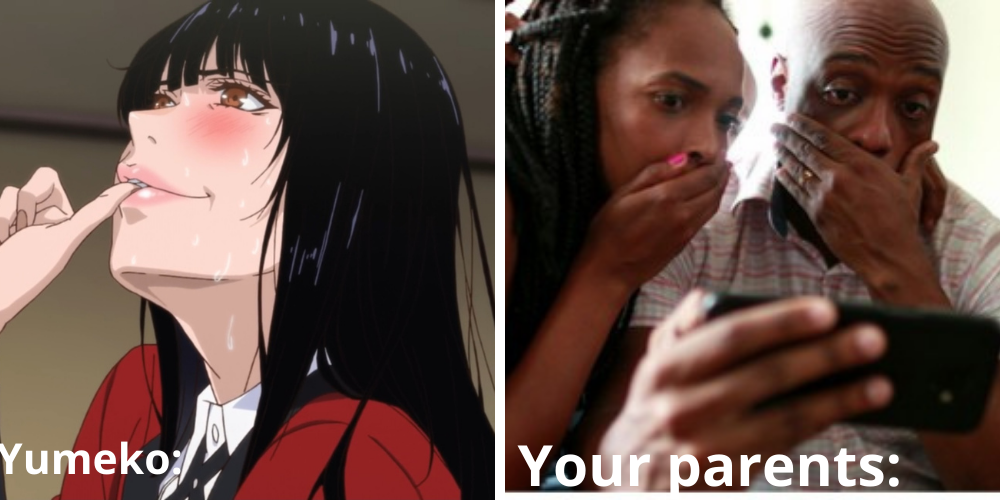 Don’t Watch These 6 Anime Series With Your Nigerian Parents

There are some anime series that you should only watch alone, or with friends at most, because even though they have amazing storylines, damn it! Sex jokes can be crazy. If your parents are the cool type who watches TV with you and “gets” cartoons, make sure they don’t see them. They will start to wonder if they should have behaved more like typical Nigerian parents.

I wonder what was going through the minds of the creators when they made this series. They introduced Yumeko Jabami as a sweet, sweet baby, and in what seemed like a second; we realized that this girl was worse than all the already crazy students put together. The children were playing, using guns, knives and were always excited about the game? Sit down this one.

If you like Kakegurui, you’ll probably like Prison School. Hachimitsu Academy, one of Tokyo’s strictest girls’ academies, admitted boys to their all-girls school and made them live in a prison. Normal people would crack up in the terrible conditions these boys have to endure, but no, they enjoy it. No matter how painful or humiliating it is, they love it. I have no words because this anime is every masochist’s dream and we try not to put you to shame.

This one is odd because it also counts as a feel-good anime until they start cooking. From the way Mito talks about her “premium meat” like she wants to sleep with it, to the way the judges react when they eat the students’ food. If you watch it with your parents, you get disowned for sure.

The four main characters are the only ones who can save their hometown, which is odd because they’re terrible at their jobs. These characters get into more trouble than necessary, rob the poor because they’re broke as hell, and dare to fight armored enemies in bikinis. With these few points of mine, I hope I was able to warn you to help yourself and save your legacy.

Compared to the other series on this list, Konosuba is child’s play (literally). It’s a fun story about a boy who dies miserably and lives in a role-playing world. He has an extremely useless Goddess in his small group, a Wizard who can only use explosion magic once (and instantly faints right after), and a Crusader who gets excited by being hit, beaten, or torture. Keep out of the reach of Nigerian parents.

This series should begin with a disclaimer stating: “Warning: nudity X100”

If someone catches you watching this show, they should judge you, talk more about watching with your parents. The main character has sex with a demon, ffs!, and never in my life have I seen breasts called so many things but her real name. If you watch High School DXD, you need divine intervention.